When it comes to craftsmanship, there is certainly no lack of incredible talent amongst the women of the Maasai. Yet as individuals they are much more than just artisans, wives and daughters – they are strong and independent-minded women with personalities and histories as colourful as the beads that adorn their bodies.

From the outside looking in, the Maasai way of life can be quite bemusing. For the inside scoop, we’ve sat down with some of the amazing women we’ve been working with in Mkuru, Tanzania so they could tell us their stories. Here’s what some of them had to say.

The 38-year-old Elyamani possesses spiritedness and intelligence that go a long way back to her childhood. She enjoyed attending primary school in her village, but her educational experience was unfortunately cut short after she married and was obliged to move to a small rural Tanzanian town with her husband to fulfil her compliant role as a spouse. She never did obtain the results of her completion exam. “I never knew if I had succeeded,” she says. But she remembers how she loved learning about English, geography and history.

She tells us she “would have loved to continue studying.”

But her husband did not allow her to do so. Although primary education is public in Kenya and Tanzania, less than 50% of Maasai women are educated. This is largely due to early marriage and family duties.

School kindled Elyamani’s passions for knowledge and self-expression, values to which she still stays true. In fact, she is one of the most opinionated and courageously outspoken women we have interacted with. Her intelligence shines bright and fuels her continual fight for her rights in the community.

Despite everything, life in her current village isn’t easy on Elyamani. The contrast between childhood in the schoolyard and her current dutiful matrimonial life often fills her with nostalgia. She doesn’t really like it in Kilimanjaro – her dreams are painted with the grassy colours of her bucolic home. Sometimes her dreams even take her beyond her city and her continent, all the way to Europe. “Maybe in Europe people are nicer. I don’t know, because I’ve never been there!”

Herself bound to her husband’s side, Elyamani tell us of hopes to send her children to Europe where they might one day pursue their own education. Her last daughter Elizabeth is intelligent just like her mother. We hope that she will attend school and eventually become part of the management team for our ethical jewellery project!

Elyamani is incredibly inspirational. She is a testament to the empowerment education can bestow on women of the Maasai.

Like most other Maasai women, the trajectory of Miriam’s life has been difficult and riddled with painful experiences. She is one of the respected elders of the group and currently helps Theresia, chief of the Mkuru women’s community, to translate speeches into Swahili. She is also a fundi, or expert, of Tanzanian Maasai women’s art – her beading is delicate, precise and nothing short of magnificent.

In addition to undertaking a multitude of community engagements, Miriam shoulders the burden of caring for her family all on her own. Unlike other wives in wedlock, she hasn’t a husband for support. At a young age she was “gifted” as a wife to a man she didn’t love. Following their marriage, her husband took other wives and fell prey to alcoholism.

“He would come home every evening drunk and would beat me. Alcohol had changed his mind, and he didn’t love me anymore. One day he threatened me with a knife and said he would kill me. I decided then to escape and go back to my parents’ boma” (village with a livestock enclosure).

Love is a luxury for the Maasai marriage. But love, however, is not lost on Miriam. She recalls the spirited pre-marital days, when she loved to spend time with young men and became infatuated with one in particular. She would always carefully prepare and decorate a calabash of preserved milk, take it to him and spend her time delightedly watching him dance. Yet Miriam, like most other women in her tribe, have no say in their choice of spouse and can be offered like commodities to men they don’t love. If luck is on her side, a woman may end up with a caring husband. But in reality she often has to endure abuse and live alongside her husband’s other wives.

Miriam strongly believes that women need to be independent. They should be able to stand up for themselves and make decisions alongside their husbands. Thankfully, albeit very slowly, we are beginning to see such shifts in some Maasai families.

Lea has a real penchant for the arts: she takes part in the church choir and one of the best artisans in the group. She also has a cheery and strong personality – all the more admirable when we discovered the distressing events of her life.

After marrying her husband Isay Olanatii, the pair became distressed since Lea was not able to conceive for a long time. As per Maasai tradition Lea was gifted a newborn child, Joshua, from the wife of Isay’s brother. She cared deeply for little Joshua, but Isay continually reproached her and beat her for being infertile. Eventually he left Lea for another woman who went on to bear him six children.

Lea still endures marriage problems today. In addition, things aren’t looking good for 8-year-old Joshua. He has recently contracted a serious illness. Although currently in a stable condition, the doctors anticipate an early death for the boy. Despite everything Lea still holds high hopes for young Joshua to attend school, but this may not be possible given his health condition.

It is truly hard for us to imagine how difficult Lea’s life must be in light of her son’s predicament and her failed marriage. Yet remarkably, like a true Maasai woman, Lea remains tough and lives spiritedly.

Because of the culturally prescribed status of Maasai women, our artisan partners often endure incredible hardships and continue to shoulder tremendous burdens on a daily basis.

We recognize their plight and we greatly cherish their partnership – we hope participation in our ethical jewellery project will open new doors for them and bring them the hope, joy and love they truly deserve.

Visit our site to see photos and find out more about the gorgeous handiwork of these women! Click on the image below. 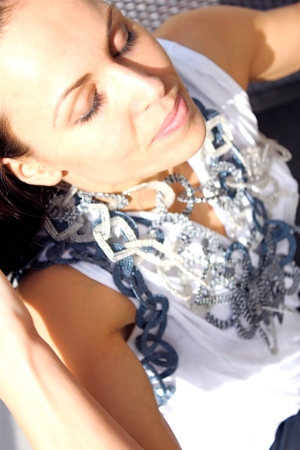 Feel and look like royalty AND empower struggling tribal communities at the foot of Mount Kilimanjaro. It doesn't get much better than that!